Book Review of To Dream by Louis K. Lowy 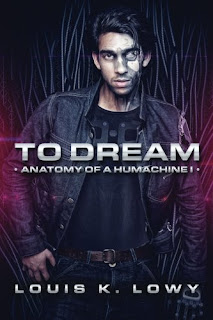 To Dream is the first installment in the Anatomy of a Humachine series. Billed and reviewed as an AI epic, I found the story was really about human loss. J-1, the AI robot at the center of the story, serves mostly as an innocent vessel on which the human participants write their grief.

Dr. Niyati Bopari creates J-1 in the image of her dead son, infusing him with his DNA. Unaware of his connection to Dr. Bopari, it’s her grief that gives J-1 his power as they run from the corporate forces that would soil her son’s name. There is some wonderful imagery as they escape into the Everglades including a memorable Dairy Queen in Seminole territory. It’s an escape that is doomed to failure however. No amount of grief or longing will bring our dead loved ones back.

Hundreds of years later, on the Planet Truatta, J-1 faces a new kind of grief, not that of human individuals but that of whole communities. Caught between an interplanetary battle for a life-giving substance, J-1 represents the Earthling enemies of the Truattan people. The Truattan people seem to exist for the sole purpose of avenging the death of their families at the hands of the Earthlings. J-1 learns of his genesis but cannot understand why innocence is always punished by the grief-stricken. It is one of humanities greatest ironies that those who have suffered the greatest are often the ones who turn around and inflict the most pain.

I enjoyed the detailed technologies used throughout the book. Although I sometimes wanted to learn more about how they worked, the author did a good job making them natural to the story and not plot devices as so many sci-fi authors do.

To Dream is filled with many characters and mind-swirling time jumps that Lowy effectively ties together in a shocking ending as J-1 experiences his own grief and its wild consequence.
https://www.amazon.com/Dream-Anatomy-Humachine-1/dp/1925496074/ref=sr_1_1?ie=UTF8&qid=1488079782&sr=8-1&keywords=to+dream+lowy
Posted by Christopher Tozier at 7:33 PM