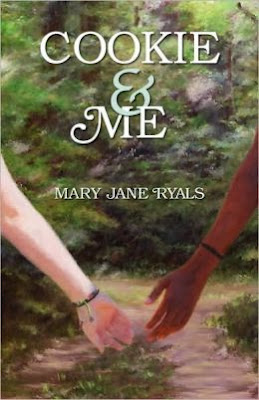 
It seems almost inevitable that Mary Jane Ryals' young adult book Cookie and Me is linked to the classic To Kill a Mockingbird. Most reviews make the connection. I myself wrote one for Amazon. After deeper consideration, I think it is a mistake. Even lazy.

Mockingbird is an adult mind reminiscing almost archetypally on innocence and justice.
Rayann (the "me" in Cookie and Me) is clearly an adolescent mind, old enough to start formulating her own opinions but still young enough not to be conquered by them. She isn't innocent because none of us are innocent. But she isn't jaded either. Rayann's voice is  lyrical and sophisticated. The setting and characters are evocative and rooted deeply in their place in history, 1960s Tallahassee. Rayann befriends Cookie, a young African-american girl, counter to all social expectations. From the very beginning, their friendship is founded on the compatibility of their personalities rather than the taboo. I think this is a brilliant tack. It elevates their friendship in the face of turmoil.

Rayann is a capable and sensitive protagonist, but she is also a product of the time. She doesn't have the kind of guidance to lead her and her best friend through the minefield their friendship represents, so this story is filled with teen-aged missteps, sadness, helplessness, and contradictions as well as moments of great beauty. Her life is complicated by her relationship with her father and ailing mother. The pure childlike joy in which Rayann pursues her friendship with Cookie is intoxicating. Like the faint smell of dinner after a long hike, it's promise propels Rayann forward through all of the personal and social obstacles.
Despite the specificity of the setting, the story has universal appeal. Befriending someone you are not "supposed to" and suffering the social consequences. These are themes that all teens flirt with if not embrace as they become adults.
Ryals is an accomplished poet. She made the transition to fiction with great skill. This is beautiful writing. The simplicity of childhood friendship reels, often dreamlike, in a swirling world of Florida nature, southern culture, and personal identity. The book ultimately is about how honesty and love suffers and survives. I recommend it highly.


Learn more about Mary Jane Ryals, including her wonderful poetry.
Posted by Christopher Tozier at 7:48 AM