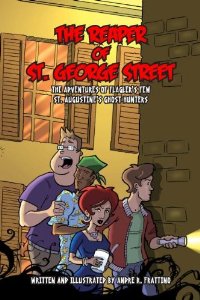 William Garrings is new to St. Augustine, Florida and an avowed skeptic in Andre Frattino's first graphic novel in the Flagler Few series. Things don't start out easy for William. His wallet is stolen, he's arrested, and his apartment is rented out to a comic book enthusiast Franklin Dinklemyer. And, it turns out, that St Augustine is crawling with ghosts.
Along with Roger Blimes, the con-man / wannabe pirate who stole his wallet and Allison Stewart, an enigmatic mystic, they set out to solve the hauntings that plague Claire Evans, Williams new girlfriend.
Frattino's style is easy to follow, a feature I appreciated. In particular, the panels featuring St. Augustine cityscapes jumped off the page with artful compactness. The city becomes a character in itself, making this a great book to read if you are visiting. There is plenty of character humor too, often created by the expressions on their faces and Frattino's sense of timing.
Ultimately, of course, a ghost hunting story has to have a properly scary ghost. I didn't know what a reaper was until I read this book. I'm not going to spoil the spooky parts but I was startled enough. It isn't extremely scary by any means.
I read the entirety of Reaper in one sitting. I was charmed by William and Clair's relationship, Roger's humor, and the constant wondering of who is alive and who is a ghost. The ending was
surprising and bittersweet.
I recommend The Reaper of St George Street for ages 10 an up!

Posted by Christopher Tozier at 6:36 PM