I am thrilled to announce that Olivia Brophie and the Pearl of Tagelus will be published by Pineapple Press and hit the shelves in 2012. This book has been a big part of my life for a few years now and I couldn't be happier that Pineapple is interested in it. I probably own half of their catalog. As the process moves forward, I will keep you up to date on anything interesting. It is very fulfilling to have other people invested in a creative endeavor, including the editor, artist, and promotional staff.


Fantasy Fiction.Young Olivia moves to the Florida scrub and finds much more than sand and scrawny oak trees. Caught in a battle for the fate of the universe, she slips down a tortoise burrow into the vast Floridan Aquifer where ancient animals thrive in a mysterious world. She learns the secret of a brilliant pearl and must use its power to discover her life's ultimate destiny.
Although I'm a science nerd, I wrote the book to hide the science. Instead of faeries or wizards, I wanted to create a more local, North American mythology that drove the fantasy world. It can be enjoyed simply as a young fantasy adventure with interesting, complex characters and a lot of action. So keep your eyes open, I will post more!

Posted by Christopher Tozier at 9:51 AM No comments:

Two Visitors and a New Roommate

Lately, a pair of black vultures have taken an interest in our roof. We can hear them clammoring above us, but whenever we go outside to take a look, they simply stare innocently back at us. I will need to set up a camera to determine what the excitement is all about. This is the best shot I could get of one. I happen to like them, but my wife is a bit suspicious. For what it is worth, vultures are known to be the most monogamous of birds.
We also have a new roomie. A yearling gopher tortoise has decided to move into our courtyard. He dug a small burrow (very cute) and loves prowling the pavers for weeds to chew on.  What follows is a gopher tortoise poem I could never get right. I have given up on turning it into a decent poem so I am posting it after the pictures where few readers dare follow.
Two Before the Burrow
I.
Morning, the catfish pond drags dew back,
the wind’s cotton bolt unwraps and ribbons
off over the tree tops, late for work, new light
trailing its yolk behind.
I scatter a handful of trout pellets to the choir
and their jubilant mouths smack open to the sky.
A school of spinning gnats scrambles itself a tesseract
above the yawning water, disappears one by one
into the dimension of dragonfly.
I crouch before the burrow
carefully dug in a quiet corner of my backyard.
For years, an old gopher tortoise has lived here,
most of the time indoors with the blinds drawn shut.
I do not know much of him, but I do know
this burrow is his pride and joy. His obsession.
More than food. More than love.
I do know of this little bit.
Silently, he sculpts its sandy walls, a stucco
in the squat arc of his silhouette.
Its floor is always soft underfoot.
I’ve watched him from the porch.
His work is never done.
Refinement, refinement
bores down into the planet,
a roiling core,
agape space
around which the earth spins.
II.
I’ve identified the tortoise burrow’s three stages:
the fluted berm spreading out to the field,
the vestibule of interstitial light,
the unseeable root cellar.
Sixty-three other species share these rooms,
or might at any given moment.
We cannot comprehend that kind of magnanimity,
though to be fair, we do not know
what hegemonies exist within.
Perhaps they are told to leave their dirty boots
in the foyer, slide into purple guest slippers
sewn from the bruised lips of salvia and violet.

Perhaps they are made to endlessly scrub the floor
if they want to escape spring fires
and enjoy nopale jam from the larder
while the creatures above, the deer,
the bobcat, the bear, the pine
burn, burn for being large and hungry.

Perhaps there is forced blackmail involved
-- an embezzlement of the mind --
and they are down there chained to each other
the white frogs, the bobwhite,
the indigo snake (for whom
a peculiar silver shackle was fashioned)
the golden mouse, the small dirt owl,
the skink, the clucking
of the tortoise’s sharp beak.

Please note that the poems and narratives on this site are copyrighted and may not be reproduced without the author's permission.

Posted by Christopher Tozier at 11:41 PM No comments:

Wasp Mimics in the Florida Scrub

We are excited about the appearance of a mother bear and her four newborn cubs in our backyard this week. Most bear broods are 2-3 cubs, so we are lucky. A few years ago, there was a brood of five cubs in the area. The most amazing part of the story is that all five lived to adulthood. Perhaps this is the same mother.
Also making an appearance this week is Strangalia luteicornis. These longhorn beetles are quite common throughout the Eastern US. The easiest place to find them in the Florida scrub is to first find a winged sumac tree and give it a good shake.

Here are some other wasp mimics that have made appearances in our yard. They are all members of the day-flying wasp moths. The Oleander moth is very common in Florida. Anywhere you find Oleander growing, there will often be hundreds of black-furry orange caterpillars feeding on the poisonous leaves. Unfortunately, people often kill all of them to save their oleanders.
The wasp moths are beautiful, the equal to any butterfly.


Posted by Christopher Tozier at 7:29 AM No comments:

Is there a better place in the world to enjoy a day hike? 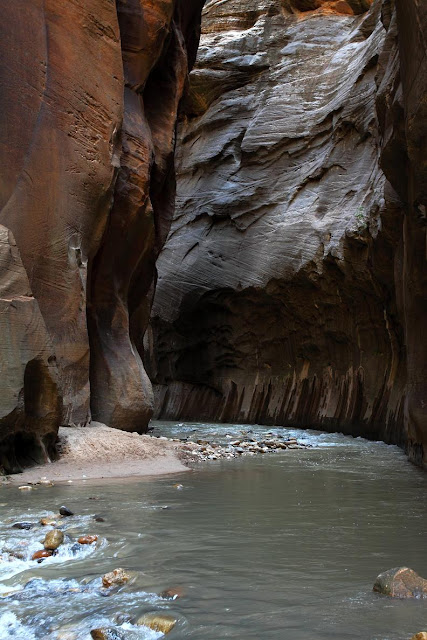 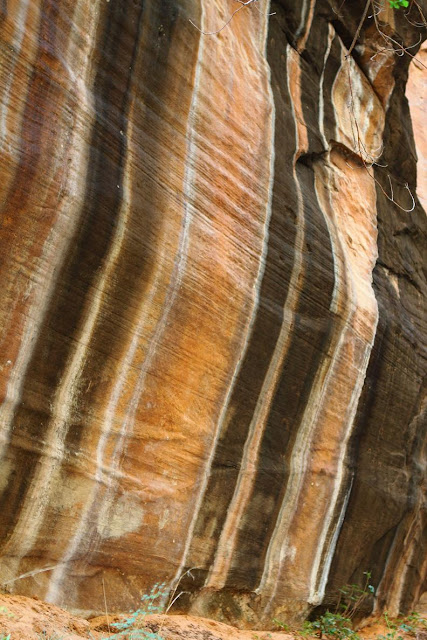 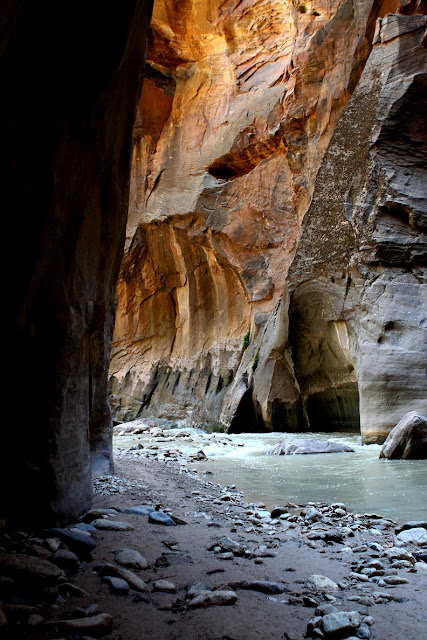 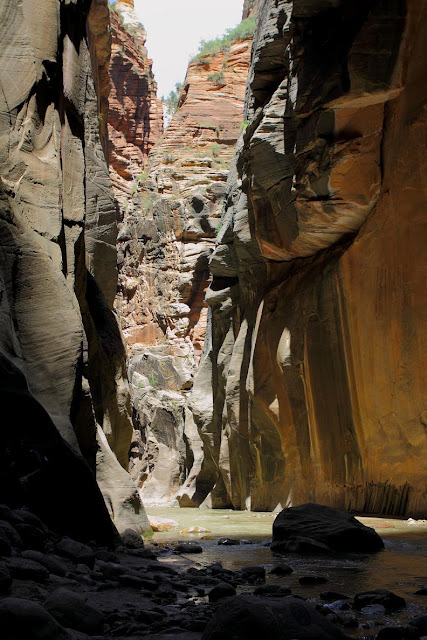 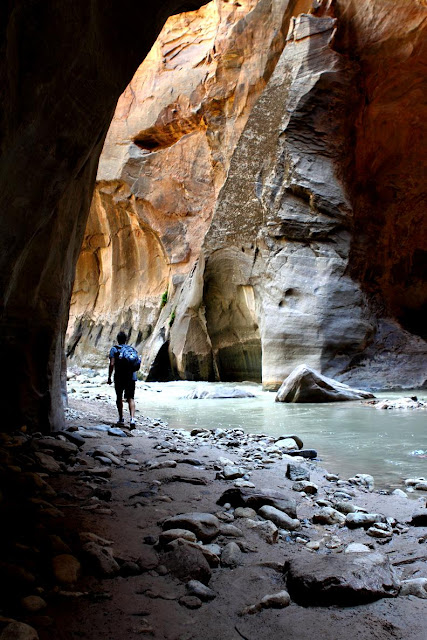 Posted by Christopher Tozier at 9:43 AM No comments:

I love to watch clouds. Unfortunately, I rarely have a camera when something interesting happens. This time I lucked out. This picture was taken from my backyard looking west over my rooftop. It is a nice example of irisation, or iridescent clouds. Irisation typically occurs in lenticular clouds due to the uniformity of the droplet size. Lenticular clouds are most common in the mountains. So why are we seeing them in Florida?
It turns out that thunderstorms act like a kind of mountain. Air rises up over the thunderheads as if the storms were as solid as mountains. Although the lenticulars are not rare, we don't see them often in the Florida scrub because our horizon is blocked by trees. It is tough to see what is on top of a thunderhead. 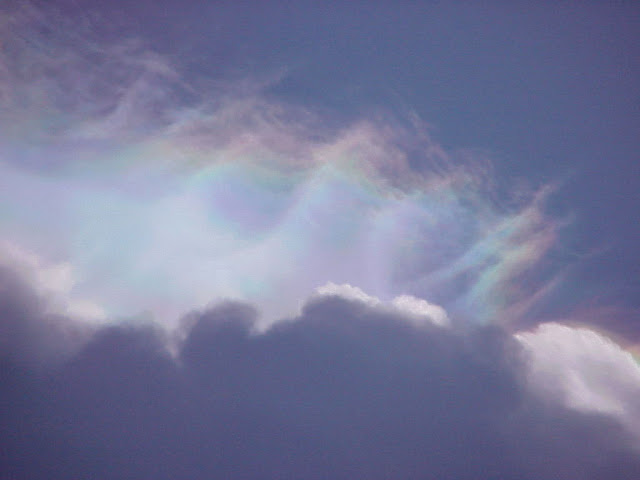 In this case, the lenticular cloud was so big, it is spilling over the edge of the storm cloud. It is not a great example of a lenticular cloud because it is getting disrupted by the turbulent air at the brink of the thunderhead. Usually, lenticular are very compact. As you can see in the picture, the irisation appears to be made of a different air mass, like oil floating on top of water. 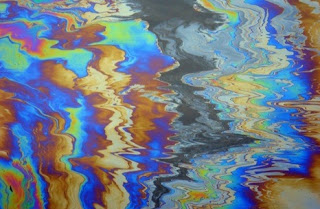 Posted by Christopher Tozier at 6:56 AM No comments: