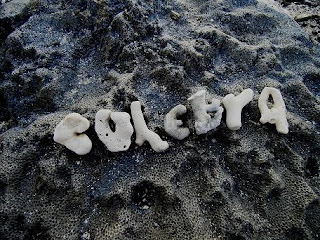 ﻿﻿ One year ago, we visited Culebra, Puerto Rico, an island off the northeast coast of PR and one of the Spanish Virgin Islands. Long known as a spring break destination for Puerto Rican students, it remains a very laid back and little-visited island the rest of the year. 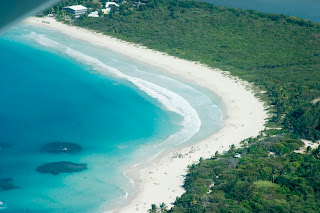 Culebra is famous for its beautiful, secluded beaches and excellent snorkeling. Of course, this is exactly what we were looking to find. Playa Flamenco is the most popular beach on the island and the most crowded. Here is a picture of Playa Flamenco as we flew over. By Florida standards, Playa Flamenco was relatively quiet.
If you decide to visit Culebra, please consider flying from San Juan to the island. There is a ferry from Fajardo but when you are time-constrained it can be pretty stressful and frustrating. That being said, the ferry served us well multiple times during our visit.
Once you are in the parking lot of Playa Flamenco, look for a chain-link fence. There is a gate on the back corner that is chained and locked but open just enough to slide through. Everything about it says "illegal trespassing" and "you don't want to spend time in a foreign prison do you?" but this is the auspicious entrance to the best beach and snorkeling on the island, Playa Carlos Rosario.
Despite the official gate and trail, we decided to hike along the shoreline from Tamarindo where we were staying. The shoreline hike is a great way to see the island's volcanic history. Most of the hike is spent navigating cobble-sized chunks of lava and coral. On the points between beaches, old lava flows still look like they oozed out of the earth. It would be best to wear canyoneering boots to handle the water and uneven terrain. Of course, we had flimsy water shoes. As difficult as it is to hike along the shore, it is much harder to get into and out of the water with loose rock and the world's largest population of sea urchins underfoot. Take a lesson from us, get in and out of the water from the sandy beaches, not from the lava!
By the time we made it to Carlos Rosario, Melissa had a broken toe and I had several sea urchin spines embedded in my foot. We didn't bring water because there would be no place to keep it while we snorkelled. It was hot. Very hot. I started having visions of my interview on our very-own survival Discovery Channel docu-drama. 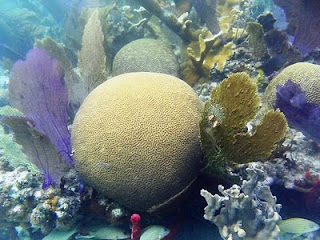 Nevertheless, the scenery was gorgeous. The reef starts only a few feet from the beach and seems to extend forever. All the credit goes to Puerto Rico and Culebra because the entire area is off-limits to fishing.  The water is filled with pristine sea fans, each with its own colony of flamingo tongue mollusks. Healthy, huge brain coral plumply sat among staghorn and elkhorn corals. Hawksbill sea turtles paddle past. Octopus nestle in the coral rubble. And of course, innumerable fish of every color imaginable flash by. The visual feast of a healthy coral reef is one of the most inspiring sights on the planet. Our broken bones and impaled feet were forgotten as we snorkeled the rest of the day. 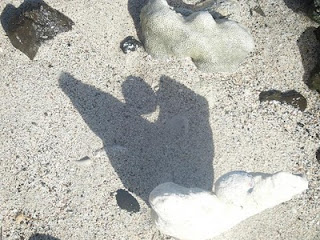 By day's end, the hike back to Tamarindo seemed far less treacherous. We made up songs praising Carlos Rosario. We cooled off at Playa Tamarido with another sea turtle. We chattered about rays and eels and how we only saw two other people all day. Later that night, we ate a relaxing meal at Barabara Rosa's. I am still trying to duplicate her fantastic homemade spaghetti sauce. It was a fitting end to a perfect day, broken toes and all.


Posted by Christopher Tozier at 8:22 AM